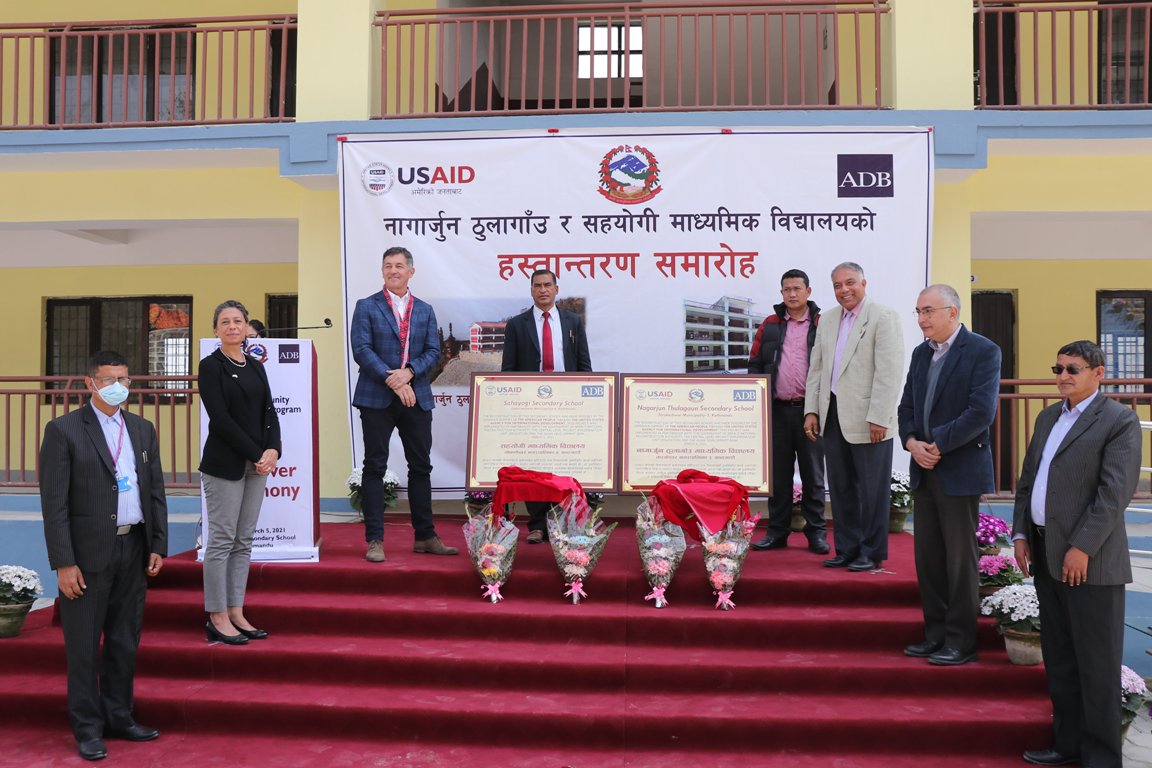 Kathmandu, March 7: Two newly-reconstructed schools built by the US government, through the United States Agency for International Development (USAID), in partnership with the Asian Development Bank (ADB) have been handed over to the concerned school management.

Chief Executive Officer of the National Reconstruction Authority (NRA) Sushil Gyewali and US Ambassador to Nepal Randy W. Berry, along with USAID Nepal Mission Director Sepideh Keyvanshad and Officer-in-Chief of the ADB Sharad Bhandari, handed over the reconstructed buildings of two secondary schools in Kathmandu – Nagarajun Thulagaun Madhyamik Bidhyalay of Tarkeswar and Gokarneswar Sahayogi Madhyamik Bidhyalay amidst a function on March 5.

Speaking at the handing over function organized at the premises of Sahayogi Madhyamik Bidhyalay of Gokarna, NRA CEO Gyewali thanked the friendly countries for providing proper space for students to study and hoped that this would further enhance the quality of education.

Ambassador Berry said that the U.S. government shares Nepal’s priority of getting children back in school. “As part of this commitment, we partnered with the ADB and NRA to construct seismically safe, well-equipped, and child- and disabled-friendly schools,” he said, adding, “This reflects the longstanding and continued support of the American people to help rebuild a safer Nepal.”

The U.S. government, through USAID, in partnership with the ADB, has partnered with the NRA, and the Ministry of Education, Science, and Technology to complete the reconstruction of 29 permanent schools in Nepal. With these two more schools, 17 schools have now been completed and handed over to the concerned school management. Construction of 12 other schools is currently on-going.